Back to Grass Pasture:

Since the late 1990s, a growing number of ranchers have stopped sending their animals to the feedlots to be fattened on grain, soy and other supplements. Instead, they are keeping their animals home on the range where they forage on pasture, their native diet. These new-age ranchers do not treat their livestock with hormones or feed them growth-promoting additives. As a result, the animals grow at a natural pace. For these reasons and more, grass-fed animals live low-stress lives and are so healthy there is no reason to treat them with antibiotics or other drugs.

A major benefit of raising animals on pasture is that their products are healthier for you. For example, compared with feedlot meat, meat from grass-fed beef, bison, lamb and goats has less total fat, saturated fat, cholesterol, and calories. It also has more vitamin E, beta-carotene, vitamin C, and a number of health-promoting fats, including omega-3 fatty acids and "conjugated linoleic acid," or CLA.

Grass fed beef has about the same amount of fat as skinless chicken, wild deer or elk, and like these other lean meats, it actually lowers your LDL cholesterol. Grass Fed Beef is four to six times lower in fat than grain fed beef and contains only half the saturated fat, making it as lean as poultry and wild game.

When you choose to eat meat from animals raised on pasture, you are improving the welfare of the animals, helping to put an end to environmental degradation, helping small-scale ranchers and farmers make a living from the land, helping to sustain rural communities, and giving your family the healthiest possible food. It's a win-win-win-win situation.

Raising animals on pasture is dramatically different from the status quo. Virtually all the meat products that you find in the supermarket come from animals raised in confinement in large facilities called CAFOs or "Confined Animal Feeding Operations." These highly mechanized operations provide a year-round supply of food at a reasonable price. Although the food is cheap and convenient, there is growing recognition that factory farming creates a host of problems, including:

Animals raised in factory farms are given diets designed to boost their productivity and lower costs. The main ingredients are genetically modified grain and soy that are kept at artificially low prices by government subsidies. To further cut costs, the feed may also contain "by-product feedstuffs" such as municipal garbage, stale pastry, chicken feathers, and candy. Until 1997, U.S. cattle were also being fed meat that had been trimmed from other cattle, in effect turning herbivores into carnivores. This unnatural practice is believed to be the underlying cause of BSE or "mad cow disease."

A high-grain diet can cause physical problems for ruminants-cud-chewing animals such as cattle, dairy cows, goats, bison, and sheep. Ruminants are designed to eat fibrous grasses, plants, and shrubs-not starchy, low-fiber grain. When they are switched from pasture to grain, they can become afflicted with a number of disorders, including a common but painful condition called "subacute acidosis." Cattle with subacute acidosis kick at their bellies, go off their feed, and eat dirt. To prevent more serious and sometimes fatal reactions, the animals are given chemical additives along with a constant, low-level dose of antibiotics. Some of these antibiotics are the same ones used in human medicine. When medications are overused in the feedlots, bacteria become resistant to them. When people become infected with these new, disease-resistant bacteria, there are fewer medications available to treat them.

When animals are raised in feedlots or cages, they deposit large amounts of manure in a small amount of space. The manure must be collected and transported away from the area, an expensive proposition. To cut costs, it is dumped as close to the feedlot as possible. As a result, the surrounding soil is overloaded with nutrients, which can cause ground and water pollution. When animals are raised outdoors on pasture, their manure is spread over a wide area of land, making it a welcome source of organic fertilizer, not a "waste management problem." 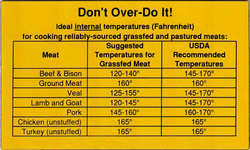 Grass-fed cookbook author Shannon Hayes has come up with her own kitchen magnet. It lists the ideal internal temperatures (Fahrenheit) for cooking "reliably-sourced grassfed and pastured meats."

Grass-fed meats contain less fat than grain-fed meats, so are usually cooked more slowly and at lower temperatures to prevent the meat from becoming dry. Hayes also recommends that—except for poultry and ground meats—you take them off the grill or out of the oven before they reach the standard temperatures recommended by the USDA.

This bright yellow chart lists both the suggested temperatures and the USDA recommended temperatures for beef and bison, ground meat, veal, lamb and goat, pork, and poultry. Make cooking easier. Keep this great reference tool handy in your kitchen! 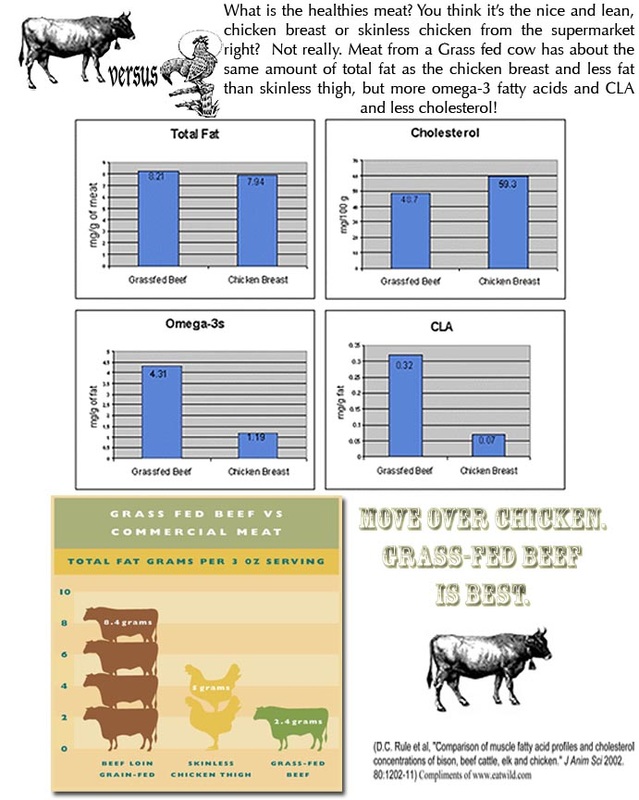